Thank you for visiting our site but we will no longer be posting Spring Break Missions updates on this blog. Please visit us at our new and improved site ~     www.taylorworldoutreach.wordpress.com

While there, feel free to browse around the site and check out any of Taylor World Outreach’s four ministry programs ~ Community Outreach, World Opportunities, Lighthouse, and Spring Break Missions.

The team bloggers wrote this prior to their leaving for Mexico. So, this one is a few days old!

We are eagerly approaching our departure from Taylor University to Cancun, Mexico in less than a week! In preparing and getting to know one another before our trip, we have gathered every week for class time. Our class time has consisted of growing the relationships with ourselves, each other, and God before we start serving. The time together has all revolved around Slow Kingdom Coming, a book by Kent Annan. In this book, we have been “awakened” to the many truths that God tells us through his word, which have been covered through five different practices which were highlighted in the book. These practices include: attention, confession, respect, partnering, and truthing. Each of these different practices outline a healthy way of serving on a short-term mission trip, and help us understand that the kingdom to come on earth is a process.

Our team is excited to be awakened to what God has to display. We want to be the hands and feet of Jesus by living out our team’s verse Isaiah 1:17 to the best of our capability.

“Learn to do right; seek justice. Defend the oppressed. Take up the cause of the fatherless; plead the case of the widow.”

As we continue to prepare and awaken our hearts now and while in Mexico, you could continue your support for us through prayer.

Some things you could pray for regarding our trip include:

Thank you for all the prayers and support. We look forward to sharing more about our experiences in Mexico in the coming weeks!

So far, so good. We arrived to Daytona Beach safely on Saturday in the late morning. We shed our winter layers and said hello to the sunshine. A few people have even gotten a bit of sunburn already, so we’re all trying to liberally apply on a regular basis. We have to try to learn from others, right?

Anyways, after a day of rest, preparation, and more team building, some of us went out on the boardwalk to get a start at the week. It was a Sunday evening so not too many people were out, but we were able to talk with those who were around. Talking to people and actually jumping in to initiate conversations with my group has built some more confidence in me to step out in courage more and I’m grateful for that.

This morning, we gathered on the beach with another group that is here for some morning worship. I felt like being by the ocean made the iconic water references in Christian worship songs stick out all the more. But they also felt so more surreal once I thought about them for longer. God’s character is so beautifully revealed through nature and I really appreciate this morning’s experience with the ocean.

After worship, we headed up to some breakfast and we will start our team devotions pretty soon. I’m so excited for today and our start to this awesome week. If you could, please pray that our hearts are expectant for God’s miracles and that we may know on a deeper level that anything that happens is only by God’s doing.
Thanks so much for your prayers!

It’s Easter….and as we watch the sunrise, we are reminded that this is the day and the reason that brought us to Daytona. The opportunity and privilege of telling the people of Daytona that the world, while dark, is not hopeless. That the Son has risen. And with Him, hope and redemption has come.

As we pack up our three white vans and begin the long journey home, we leave behind some good friends along with some new brothers and sisters. We take with us a reminder that in the darkness, Christ love shines brightest. Pray with us that those who have come to know the savior will find fellowship and opportunities for discipleship. For those who are considering the message, they will not be able to rest until they make the decision to call out to the Lord. Remember our beautiful friends at Ocean View…and the homeless we’ve come to know and love. For protection, peace and the knowledge that they are loved and not forgotten by God. We will try to do one more post with more specific prayer requests that you (and we) can remember.

Sorry, I’ve been a little behind on the blogging. We’ve had some technical difficulties.

Thursday, we went to the beach with the children of a family that Back2Back works with. Even though these children live only about ten minutes from the beach, they rarely go. For some of them it had been months and for others it had been about an entire year since they had last been. It is not uncommon for children in the area to have never even seen the ocean. We were each assigned a child to take care of for the day at the beach. We splashed around in the waves, built sandcastles, caught fish, and buried each other in the sand.

It was a really neat experience to be able to go to the beach in Cancun during spring break to serve kids, instead of simply for a vacation. Some of our team members and their little buddies for the day really hit it off and we all dreaded returning them home.

After shopping at the market, we came back to the house and ate a delicious authentic Mexican meal. Following the meal, we had team time including worship, sharing about our fun experiences with the children, and discussing our plan for action after the trip.

We have absolutely loved the experiences we have had here and how we have grown together as a team. God has worked in so many amazing ways on this trip so far, breaking our hearts and teaching us to believe in His incredible power.

Friday, we returned to Rosie’s house to finish the wall we had begun earlier in the week. We played with some of the kids – painting, playing soccer, and just having a great time. We then bought some jewelry from Rosie that she had made. It was really neat to see that because of the jewelry we bought, she was able to pay for something she had needed money for. She has an incredible faith that God will provide.

After our time at Rosie’s, we packed up our stuff in the van and drove to the hotel as our time at Back2back came to a close. We are so thankful for the family that the staff at Back2Back became to us. They were truly a part of our team.

Today, we had a nice day off at the beach, which we spent with a few of the teenagers who volunteer with Back2back. They were incredibly hospitable, showing us our way around Cancun. As we were dropped off in the touristy area of Cancun, we experienced a bit of culture shock; it felt like a different world. It was heartbreaking to realize that the glitzy area of Cancun is just minutes away from the poverty stricken areas we had been ministering in. After a fun day at the beach, we went to a local mall to get a great deal on some Mexican food, including quesadillas and churros. When we returned to the hotel, we had a great debrief, reflection, and encouragement time. It was so nice to have a day to just get reenergized, reflect on what has happened on this trip, and prepare our hearts to return to Taylor.

Today our team went to the beach. We were all able to relax and enjoy God’s creation.  The bus ride there took us through winding roads.  Far off in the distance we could see a group of mountains and an enormous volcano.  It seemed to follow us as we zoomed through the hills.  Cows, stray dogs, and other cars flew by in the blur of countryside that swept across the window.

We spent the afternoon riding waves and collecting sea shells. On the beach there were gazebos with hammocks. In short it was paradise. Words can’t describe how restful this was for the team.  Lunch found us in the shade eating lasagna shrimp, grilled fish and chicken, seasoned rice and all kinds of tropical drinks.  Later as the tide rolled in we attempted to play soccer on the sand.  We had more trouble keeping it from the waves than from the other team.

Our team had a great time of bonding today and we have a nickname for almost everyone.

Right now we’re practicing another skit for tomorrow’s service by Life House called the everything skit. We are all so excited for Easter tomorrow. Thank you for the prayers and support.  We’re so blessed by your donations! 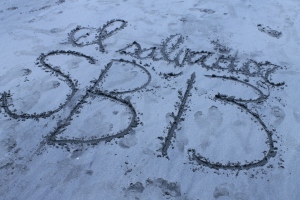 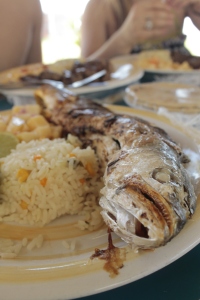 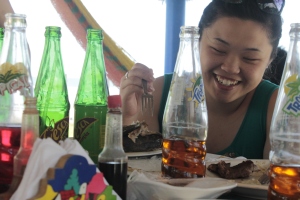 Thinking about eating the fish head 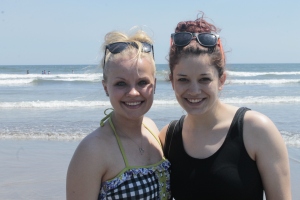